Other manuals in this series are FM 01-450-5 All services participate in the sling load certification program begun by the Army in These manuals include standardized rigging procedures and other information from that program. Chapters 2 through 13 contain rigging procedures for dual-point loads which have been certified for sling load.

Chapter 14 contains rigging procedures which have not been certified but have demonstrated acceptable static lift and flight characteristics during a flight test. Efforts were made to standardize ground crew and hookup procedures and terminology. 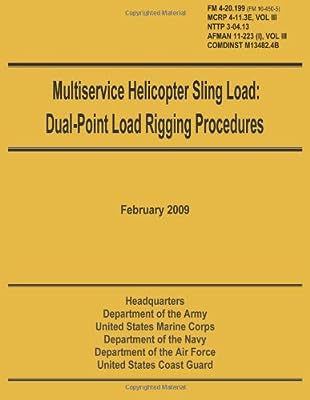 Rigging equipment and procedures described in this manual may not be authorized for all aircraft or services because of equipment or service restrictions. Recommendations for changes or improvement to the manual are requested. Readers of this publication are encouraged to submit suggestions and changes through the Universal Need Statement UNS process. The UNS recommendation should include the following information: This chapter also explains the information contained in the equipment rigging procedures and gives some general rigging instructions.

All sling loads are classified under one of the following definitions: Certified sling loads are those items of equipment dm their associated rigging procedures which have completed the evaluation and testing required by the US Army Natick Soldier Fk NSC for sling load certification.

These rigging procedures are in Chapters 2 through Only certified sling loads are authorized for the Marine Corps. The following restrictions apply for dual-point sling load certification to remain in effect: Failure to rig the load exactly as directed by the certified dual-point rigging procedure creates a unique load. When carrying loads at weights close to the aircraft hook limitations, close coordination with the aviation unit is required z z Suitable Sling Loads.

Suitable sling loads are those items of equipment and rm associated rigging procedures that have not been certified but have demonstrated acceptable static lift and flight characteristics during a flight test. In most cases these loads were not pull tested in accordance with MIL- STD, but are known loads which have been flown without incident 10-4505- years and which NSC considers to be proven safe.

These rigging procedures are 10-405-5 Chapter Unique loads are equipment carried on a one time or low-frequency basis, such as telephone poles, artillery targets, or barrier material. The lack of sling load certification in itself does not preclude a commander from carrying a unique load. Due to the lack of rigging procedures, unique loads should be considered high risk loads.

Each service is responsible for determining its policy on carrying unique loads. The name and rank of the approving authority should be printed in the bottom right corner of the 10-4505- block on DA Form R, Sling Load Inspection Record. Only the most experienced personnel should attempt to rig and inspect a unique load. When possible static lift the load prior to flight.

Prohibited sling loads are items of equipment that are prohibited from sling loading 01-450-5 determined by each service. These loads have been denied sling load certification and are a safety hazard if carried. They have either structural deficiencies or have exhibited unstable flight characteristics during flight testing. Each service will identify these loads and transmit 10-40-5 information by separate list.

Contact your service point of contact identified in the Preface if you have any questions regarding the classification of a particular load.

Each service headquarters must designate, request, and prioritize the fielded equipment to be evaluated by NSC for sling load certification.

Individual units can request sling load certification for fielded equipment through the appropriate service agency which will add the item to dm prioritized list. The NSC will evaluate the equipment on a priority basis. Dual-point loads cannot be certified for dualpoint lift based on previously certified dual-point rigging procedures because of the difference in dual hook helicopters, such as the distance between the cargo hooks.

The following agencies are 10-4500-5 for their branch of service: Helicopter sling loading of unique items, due to operational requirements, will be at the discretion of the commander.

Equipment not listed in this manual should be static lifted when possible by a crane to determine proper rigging and stability characteristics. Personnel thoroughly familiar with sling load rigging procedures should assist in the static lift testing. Flight evaluating may be conducted after a satisfactory static rigging configuration has been determined. Low density equipment with low weight and large surface area flat surfacessuch as shelters, empty trailers, pallet loads, boat shaped items, and empty fuel or water drums, are likely to become extremely unstable when flown during sling load operations, even at low airspeeds, and should be flown with extreme caution.

The maximum tested stable airspeed is listed in Appendix C. For certified loads, this airspeed is the maximum airspeed attained by the helicopter during the evaluation flight before the load became unstable or before the aircraft power requirements were exceeded.

For either certified or suitable loads, the airspeed listed is a recommendation and not a restriction, unless so stated.

The aircrew should closely monitor the load during cm flight, especially if the helicopter exceeds the recommended airspeed. The load description paragraph vm the load, model, national gm number NSN or other identification, and the weight of the load for certification. Weigh the load if there is any doubt about its actual weight. If the load weight exceeds the weight listed in the load description paragraph, the load becomes a unique load.

Contact your service point of contact if you have any questions about the load description or weight. Do not exceed the fully loaded weight. Some trailers become extremely unstable at low weights; therefore, a minimum weight is ffm. If your trailer is below that weight, add more cargo or dummy weight as close to the center of the trailer as possible until you reach the minimum weight. The preparation steps are intended to reduce the possibility of damage to the equipment caused by sling leg entanglement during the hookup and lift-off operation or by wind resistance encountered during the flight.

The arrow identifies the direction of flight. Certain sling loads, such as HMMWVs with shelters, present substantial risk of damage to the load or injury 10-45-5 the hookup personnel. This risk is increased during dual point hookup or night operations. Reach pendants should not be used on loads that have a tendency to spin during flight.

A static discharge person is not required when using a reach pendant. Inspect lifting provisions and supporting structure for damage or degradation prior to sling loading. Do not transport loads with damaged or degraded lift provisions. Do not mix different capacity reach pendants.

Place protective padding on windshields and other components that could be damaged by the metal parts of the sling set during hookup or release. The load should be secure enough to withstand winds in excess of knots caused by the forward airspeed of the aircraft. If possible, position the load in the takeoff direction so the pilot does not have to pick the load up and then turn the aircraft into the takeoff direction. Inspect and assemble the slings and miscellaneous equipment required to prepare and rig the load.

Following the instructions in Chapter 6 of FM If you have a sling set with a higher capacity than the sling set prescribed, use the chain link conversion chart in Appendix B to determine the corresponding chain link for your sling set. Position the sling set near the load. The sling legs for a typical load with four lifting points are routed as shown in Figure Odd numbered sling legs go to the same side of the load. Tie or tape the excess chain end to prevent the unrestrained chain from damaging the load.

If necessary, wrap padding around the chain or rope assembly to prevent damage to the load or sling set. If the procedures prescribe a spreader bar, install and pad it according to the rigging instructions.

Howitzer gun tubes are considered the front of the load. The front or rear is identified on other items of equipment. The sling leg numbering system prevents sling mf from crossing each other and causing damage to the sling legs or causing the load to twist in flight.

To improve flight stability, some loads are transported backwards.